Sentinel Peak "A" Mountain Maker for Lookout for Final Fires

Historical Significance:
Used as a lookout and for signal fires by the Indians prior to and since 1692 and later by early settlers.

Geological Significance:
Sentinel Peak, more commonly known as "A" Mountain, is a prominent ridge in the Tucson Mountains west of Tucson, Arizona. Sentinel Peak rises 2,897 feet to the west of the Santa Cruz River. The underground ridge of rock, running to the east, once forced groundwater to the surface. The resulting floodplain was used for agricultural fields from about 4,000 years ago until the 1930s. Residents of the nearby village of Schook-schon (Tucson) were visited by Father Francisco Kino, who established nearby Mission San Xavier del Bac, in the 1690s. When the nearby Presidio of Tucson was constructed in 1775, a sentinel stood on the top of the peak searching the horizon for raiding Apache warriors.
​
Sentinel Peak is made up of a series of volcanic rocks that represent different types of volcanic activity, though the mountain itself is not a volcano. Erosion and faulting are responsible for the mountain’s place in Tucson and its conical shape. It rests on a foundation of bedrock and is dominated by 20‑ to 30‑million-year old volcanic rocks. Volcanic ash and breccia, along with ancient lava beds, can be also be found on the mountain, as further evidence of a once active volcanic field that formed the Tucson Mountain ranges. (Source: Wikipedia) 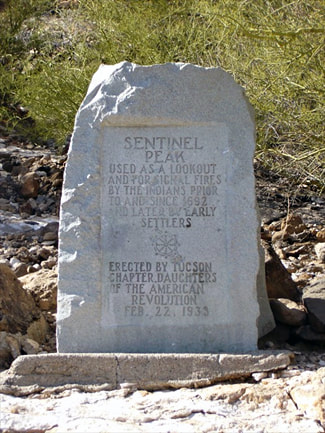