This site was also the ranch headquarters of Gray‑Hampe‑Rak from 1884 until 1943. In 1943, the Raks sold Old Camp Rucker Ranch to New York socialite Ella Dana, who in 1970 deeded the property to the U.S. Forest Service in a land exchange. Today the surviving buildings have been stabilized and stand adjacent to a popular campground. Two‑hundred people attended the dedication ceremonies in September 1973, jointly sponsored by the Coronado National Forest and the Arizona State Society of the Daughters of the American Revolution. Winifred Barrett Chapel, Regent, Tombstone Chapter, NSDAR, was the coordinator for the event sponsored by her chapter. 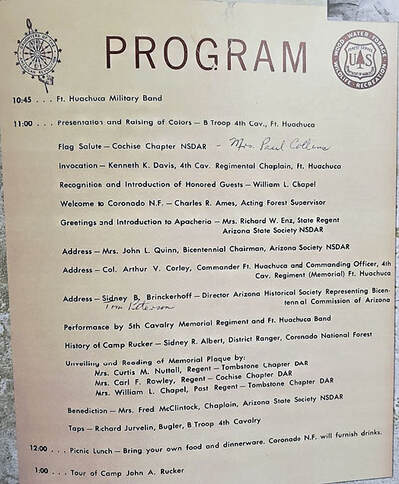