Madonna of the Trail

Marker:
Madonna of the Trail Monument

Historical Significance:
In 1909, a group of women in Missouri formed a committee to locate the Old Santa Fe Trail in Missouri and secured appropriation from the state to mark the trail with suitable boulders or monuments. The idea further developed into plans for a highway to be designated as the National Old Trails Road by an act of Congress, and the work was carried out by the National Old Trails Road Association.

In 1911, the National Society Daughters of the American Revolution established Old Trails Road as a National Memorial Highway.

In 1912, the Old Trails Road Association stated in its bylaws: “The object of the Association shall be to assist the Daughters of the American Revolution in marking old trails and to promote the construction as the Ocean-to-Ocean Highway." Missouri Judge Harry S Truman became the Association’s president.

The monument depicts a pioneer woman clasping her baby with her young son clinging to her skirts. The DAR wanted to capture the spirit of the pioneering women who boldly left the comforts of eastern hearth and home to trek into the western wilderness. The seventh of twelve monuments, this Madonna of the Trail monument was placed where the National Road intersects the Coronado Trail. Honored speakers in 1928 were Arizona Governor George W. P. Hunt and Harry S. Truman, then a judge in Missouri and President of the National Old Trails Road Association. 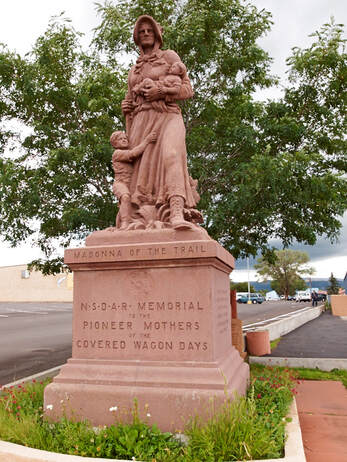 A new NSDAR insignia plaque was dedicated on August 19,  2017, in memory of June Cromer Turner, State Regent. Terri Mott and her brother Randall Turner are pictured at the rededication in honor of  their great-grandmother, June Cromer Turner.​