Directions:
Take exit 102 off interstate 8. Follow that road to the Painted Rock Petroglyph site and drive past that to north northwest. If you come to fork in road keep heading west. You will pass farmland and a house. Eventually (about 14 miles total) you will see on your left a small "cold stone house" that was used for food storage before electricity. Keep on that road west until it dead ends. Go left and cross the Gila riverbed after about 1.5 miles. At the base of a mesa look for two of the same telephone poles with a dirt track between. Turn right.

Historic Significance:
Royce and Mary Oatman and four of their seven children were killed by Native Americans in March 1851 on the shores of the Gila River, 80-90 miles east of Yuma.  Olive Oatman (14) was taken captive along with her sister Mary Anne (7) by the Indians who had killed their family. Their brother, Lorenzo (15), was beaten and presumed dead but he was alive and managed to make it to a settlement. Lorenzo was badly injured. The girls were traded from the initial tribe to the Mojave Indians from which they were eventually returned. The leader’s wife and daughter took deep affection to the girls. The photos are of Olive with the tattoos the Mojave Indians gave her and her sister. This was their tradition. She lived to the age of 65 and is buried in Sherman, Texas.

Mary Anne died of starvation after a harsh drought season. This family tragedy was reported back East in a sensational format, but it didn’t deter the gold seekers from continuing to come to Arizona.
​
Link:
Oatman Massacre Graves 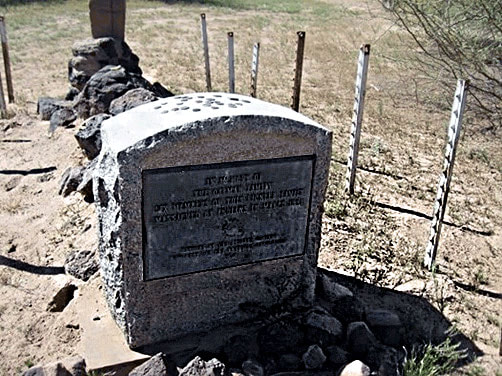