Historical Significance:
Located in the Porter Cemetery (directly behind Smurthwaite House), six Chinese elm trees were planted by Major Winfield Scott Chapter; the marker reads “in honor of all Veterans who served their country and helped settle the Arizona Territory.”

A second plaque marks a pollinator garden of plants and trees planted to provide a habitat for birds and butterflies; provided by Major Winfield Scott Chapter, NSDAR. A bench at the site was purchased and marked by Piestewa Peak Chapter, NSDAR.

The Pioneer & Military Memorial Park is a collection of seven historic cemeteries in downtown Phoenix that were in use from 1874 until 1914 known as “Block 32.” This is the final resting place for many notable Arizona pioneer citizens, including Lord Darrell Duppa whose grave has an early Arizona State DAR Historic Marker for naming Phoenix and Tempe, Arizona.

The cemetery was placed on the National Register of Historic Places in 2007. The historic Smurthwaite House, built in 1897, was restored and moved to this location 1994 by the City of Phoenix. Smurthwaite House acts as the headquarters of Pioneer Cemetery Association. Caroline Smurthwaite and her daughter were both members of DAR.
​
Dedicated:
December 20, 2018​
​
Chapter:
​Major Winfield Scott Chapter, NSDAR 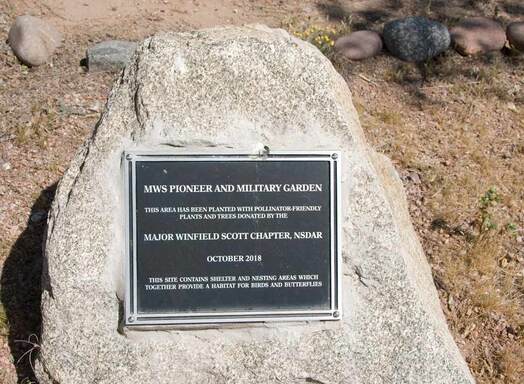