Location:
Agustin del Tucson Museum.
Presidio San Agustin del Tucson Museum
196 N. Court Avenue
Tucson, Pima County, Arizona
32.224420, -110.973556
​
Historical Significance:
In 1775, the Presidio Real de San Agustin del Tucson was established by Regular Spanish Army Lieutenant Colonel Hugo O’Conor. The fort was small and poorly constructed. After a large Apache assault in 1782, an 8- to 12-foot high adobe wall was constructed approximately 700 feet long on each side. The fort was continually updated until it reached its maximum size of 11 acres. Tucson was one of the largest frontier presidios. The Presidio was used until the Americans entered Tucson in March 1856.

DAR Historical Markers:
Eight historic markers were placed in downtown Tucson during the 1920s and 1930s as members of the Tucson Chapter, NSDAR, were concerned about the preservation of the historic Presidio San Agustin del Tucson. Two of the markers were lost, but other markers now document these historic locations. All of the markers were donated to the city when they were dedicated.

​Note:
To see this marker you must pay admission and go inside the museum. Visit the museum website  for information regarding pricing and hours.

The marker was dedicated on March 26, 1926, and placed as close to the original site as possible. Over the years a parking lot was built close to the marker. In 1976 as part of the U.S. bicentennial celebration, pictures were taken that show the marker was still in its original location.

By 1995, when the Tucson Chapter, NSDAR, celebrated its 80th birthday, the marker had disappeared. Norma Niblett, a member of the El Presidio Chapter, NSDAR, found the cornerstone marker in 2007 in the basement of the Tucson Historical Society, still attached to concrete and metal rods.

The corner stone was still missing  in 2006 when the parking lot was excavated, and an historic park was built recreating the Northeast corner of the Presidio San Agustin del Tucson. This park was funded by the City of Tucson’s Rio Nuevo District. The excavation identified the exact corner of the original wall, and members of the Tucson Chapter and other DAR visitors from Arizona rededicated the NE cornerstone marker March 20, 2008. The marker now identifies the exact location of the NE corner adobe wall of the Presidio. A picture of the cornerstone marker is published in the book Presidio San Agustin del Tucson: A View of Early Tucson that can be purchased in the gift shop at the museum.
​
Link:
Presidio San Agustín del Tucson Museum

Note:
This building is currently under construction until 2020. The plan is for the marker to be moved to a more accessible location. Watch this site for updated information.

Historical Significance:
“This disc marks the southeast corner of the old adobe wall that protected Tucson from the Indians in the early days – prior to 1845”

The marker was place on November 11, 1922, to represent the SE corner of the Old Adobe Wall of the Presidio. Mabel Moffitt, Chapter Regent (1922-1926), was probably responsible for placing most of the markers according to Tucson Chapter NSDAR history.

The original marker was an engraved stone boulder with the inscription, “This tablet marks the site of the southeast corner of the Old Adobe Wall that protected Tucson from the Indians in the early days prior to 1845.” The stone monument was moved on October 23, 1930, due to construction. The original marker was lost. In 1955, the Tucson Chapter NSDAR replaced the marker with a brass quarter-circle disc marking the SE corner. The disc was embedded in the floor of the old Pima County Assessor’s Office. 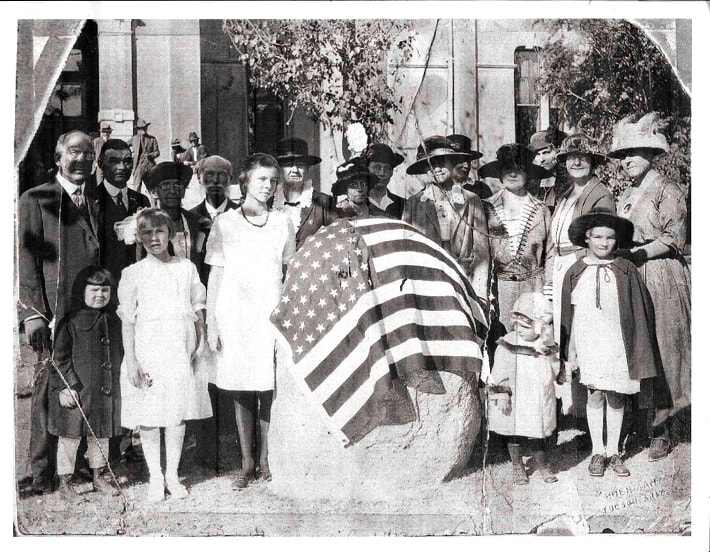 This photo was provided to Sandy Lawford, Past Regent, El Presidio Chapter NSDAR, from Mark Still. His notes from the photo are: “Elizabeth Carter Still unveiling the cornerstone of the southeast corner of an old adobe wall which protected Tucson from the Indians in the early days. Tablet erected by the Tucson Chapter of the D.A.R. Nov. 11, 1922”
“Front row, third from left [taller of the 2 girls in white] Elizabeth Carter Still; behind ECS on the right (the lady with a hat) is her mother Lyde McKeand Still, a charter member of Tucson of DAR and one of it’s [sic] early Regents.” 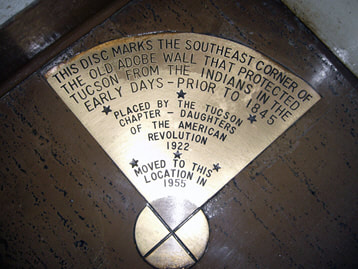 The marker was dedicated on March 26, 1926, during the DAR State Conference held in Tucson. The marker is a ten‑inch bronze plaque embedded in the block wall surrounding the J. Knox Corbett House at the corner of Washington Street and Main Avenue.

Note:
The original marker was replaced by the Tucson Historical Society in 1988. The marker is affixed to remnants of the Old Adobe Wall in front of City Hall next to the parking lot.

The marker was dedicated on March 26, 1926, the same time as the NE and NW cornerstone markers. All three of the markers were identical bronze plaques less than 10 inches wide.

The bronze SW cornerstone marker was placed on the Orndorff Hotel, but it was lost in 1935 when the hotel was demolished to build a parking lot. The hotel was originally built in 1856 and named the Phillips House for its owner.

Sam Hughes purchased the hotel from Mr. Phillips, renaming it the Cosmopolitan, and in 1896 sold it to Mrs. A. C. Orndorff. Wood reclaimed from the hotel demolition was used to make both the Tucson Chapter’s gavel and the Arizona State Regent’s Gavel, a gift from the Tucson Chapter NSDAR.

Historical Significance:
Tucson was under Spanish rule in 1846 which predates the Gadsden Purchase in 1853 by seven years. Raising the flag of the United States of America was a rebellious act. 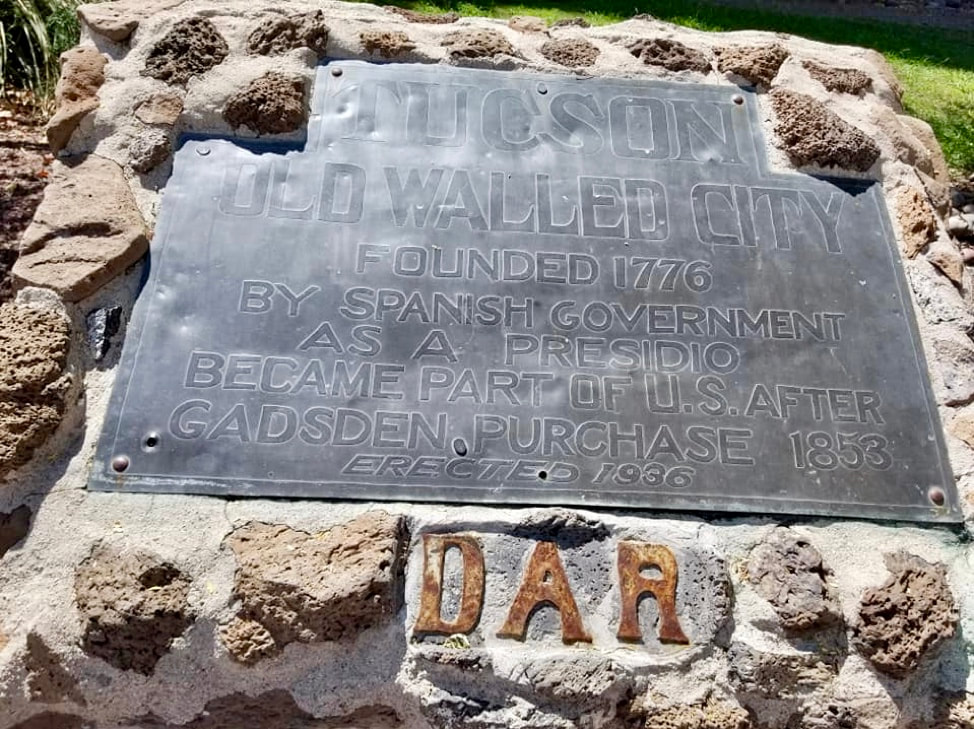