Directions:
As soon as you pass the nature center, turn left (toward the campgrounds) on Thoms Thumb Drive, then left on N. Pallisades Way/Pemberton Drive. The trail head entrance to Spur Trail is at the #9 restroom. Take Spur Trail to Granite Trail south (left). The marker and bench are a moderate distance down on the right. The trail is easy to walk. Once there you will overlook the Pemberton Wash with the Stoneman Wash Trail within it. Here is a remnant of the historic Stoneman Military Trail.

Note:
There is an entrance fee into the park.

Historical Significance:
From 1870 to 1890, the Stoneman Road was an important conduit for the shipping of supplies from Fort Whipple in Prescott to Fort McDowell on what is today the Yavapai Reservation near Fountain Hills. The route, of which only minimal traces remain, was named after 48‑year old Colonel George Stoneman.

Established in 1865, Fort McDowell was continuously short on supplies. The shortages were especially acute as the connection between the forts required a long route that swung south through Phoenix and north to Prescott. With the establishment of the Stoneman Road, a day’s ride was eliminated from the trip. On April 10, 1890, Fort McDowell was vacated by the U.S. military and became the Fort McDowell Indian Reservation, serving the Mohave, Pima, and Apache tribes. Only minimal traces are left of the Stoneman Road, due to the lack of traffic after 1890 combined with the passing of time and the Arizona weather.
​
Link:
Maricopa County Parks and Recreation - McDowell Mountain Regional Park

Work on the project entailed replacing the original wood marker with marble and retaining the original bronze plaque. Kandy Wagenbach, chairman of Grand Canyon Chapter, NSDAR, Special Grants Committee, said, “I want to thank the National Society DAR officers and chairmen who made the Special Projects grant available to our chapter, the Arizona State DAR officers for their support, and chapter members for their role in the project’s rededication.”
Courtesy of:  Sonoran News.com 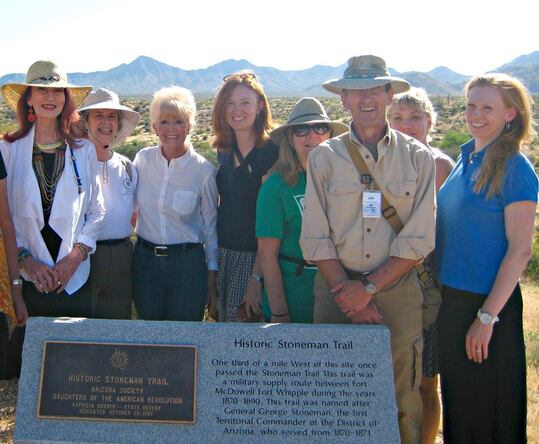